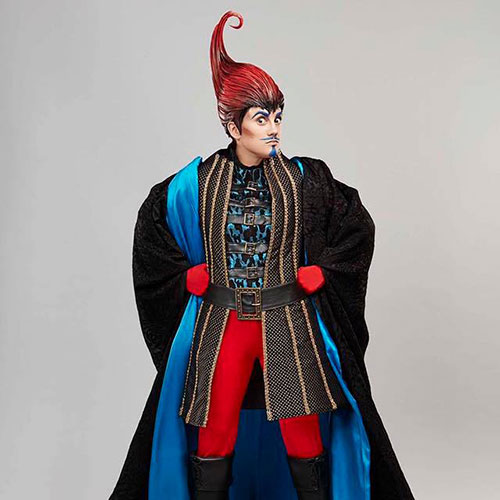 Vikki Stone returns to The Lyric Hammersmith this winter to reprise her critically acclaimed role as resident panto villain! She will play Fleshcreep in this year’s production of Jack & The Beanstalk. Tickets available here.

Press for Aladdin at The Lyric Hammersmith (Dec 2016)

“Here it is Vikki Stone’s evil, green-faced Abanazer who steals the show” Claire Allfree, The Telegraph

“Stone is the knockout” Kate Maltby, The Times

Vice is exceptionally nice in the Lyric’s festive show, with Vikki Stone’s entertainingly rascally Abanazer taking centre stage over the dame. Stone so cleverly rubs the audience up the right way with her camp wickedness that you can’t help but take a shine to her… It’s Stone who steals the show” Lyn Gardner, The Guardian

The customary panto balance is thrown off kilter by a rather subdued Widow Twankey – and indeed everybody else – being entirely superseded by the magnificent Vikki Stone as Abanazer… If there’s a better panto performance this year, I’ll be astonished.” Fiona Mountford, The Evening Standard

“The standout performance of the evening, though, comes from Vikki Stone” Financial Times

“In comedian Vikki Stone, West London has found itself a proper panto superstar; a rival at last to Hackney’s great Dame Clive Rowe. Her baddie is the absolute business – so camply malevolent that she has to calm her own boos before the show can continue.” Matt Trueman, Whatsonstage.com